Cancer of the ear is common and makes up 5–8% of all skin cancer; any non-healing ulcer of the ear, a red, scaly or bleeding area which will not heal or keeps reappearing is best removed and the tissue sent to the laboratory for investigation.  Such surgery need not spoil the appearance of the ear, but the earlier an ear tumour is removed, the easier the ear is to reconstruct.

Many ear cancers are induced by sun exposure; the tops of the ears are often exposed to sun but not often protected by sun screen. Even when sunscreens are applied to the face, the ears are often forgotten, allowing harmful rays unsuspected access to the skin of the ear. The decline in the wearing of hats, the adoption of shorter hair styles, the thinning of the ozone layer and the popularity of package holidays all contribute.

Patients on immunosuppressive therapy such as steroids, anti-transplant rejection or cancer drugs are especially at risk. 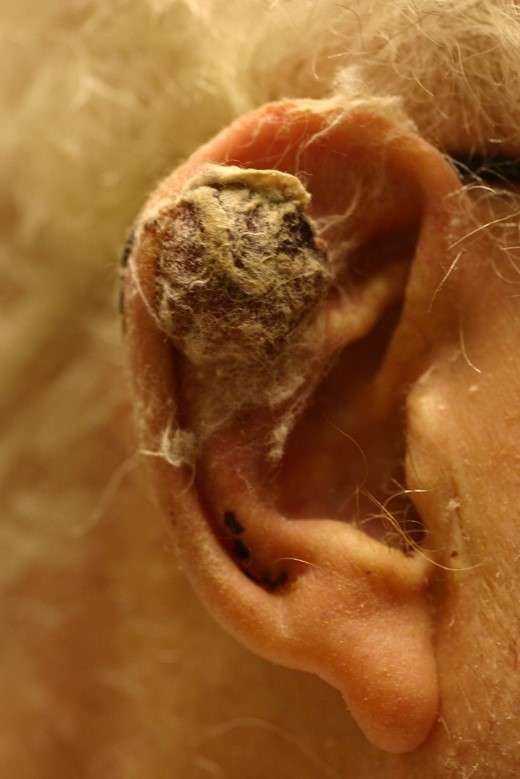 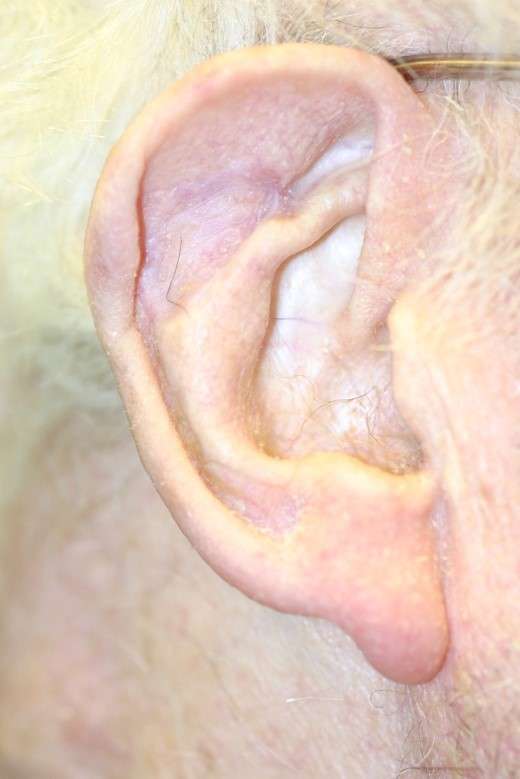 Most squamous cell tumours begin in areas of solar keratosis and the proper treatment of such minor lesions is therefore important. These discrete crusty lesions frequently develop on the exposed rim of the ear. Lesions of the concha and the back surface of the ear are more worrisome as they are more likely to spread to local lymph nodes.

Basal cell carcinoma can mimic a simple skin infection or a rash, and Any suspicious persistent lesion near the ear should be biopsied. BCC of the ear is unusual in that it tends to occur in the conchal hollow and in the groove behind the ear, areas that do not correspond to those of maximal sun exposure. Basal cell cancers of the ear often extend in a silent manner beyond the visible tumour, and this, combined with a widespread reluctance to potentially increase the postoperative deformity associated with wider margins, may explain a high recurrence rate in some cases.

Larger cancers (basal cell and squamous cell) above 2cm in diameter and recurrent tumours are especially likely to have unrecognized pockets of tumour at a distance from the visible margins. Rather than a spherical growth pattern they may have finger like projections of tumour along tissue planes. As a general rule, the likely extension beyond visible limits is equivalent to the radius of a small primary lesion with a short history but to the diameter of a recurrent longstanding or thicker lesion.

Because there is limited subcutaneous tissue, tumours will become fixed to and invade the deeper tissues, including cartilage at an early stage. Basal cell carcinoma in particular may spread laterally at the level of the perichondrium (the covering of the cartilage) beyond the visual tumour limits although this deep lateral spread rarely exceeds 5–6mm. When perichondrium is involved the underlying cartilage must be excised.

treatment of ear cancers and tumours

The majority of tumours are treated with excisional biopsies and immediate reconstruction. With most lesions, only a small margin of normal tissue needs to be removed with the tumour for cure. When a tumour is adherent to the underlying cartilage, then wider margins of skin and cartilage should be taken because of lateral spread. The more aggressive squamous cell tumours of the central and posterior parts of the ear should also be removed with a wider margin. The incidence of spread to the lymph nodes from these sites can be 6–20%, depending on how they are treated, and regular follow-up is recommended. 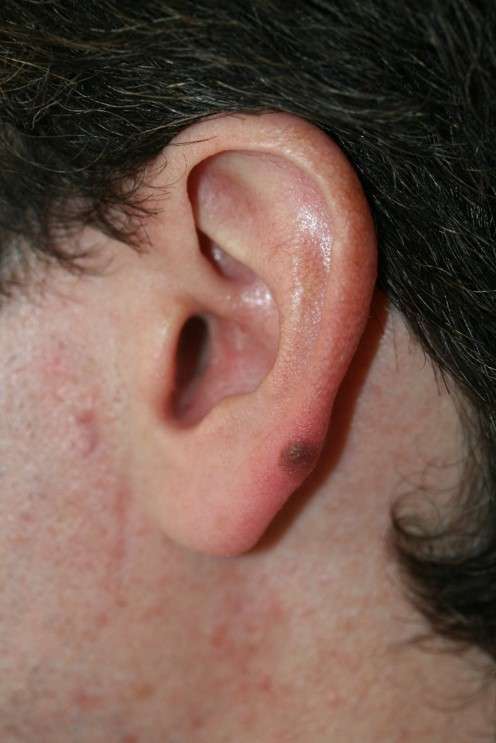 Melanoma of the ear is treated first by a confirmatory excision biopsy. Subsequent treatment depends on the tumour depth, and tumours greater than 1.5mm in thickness will require a radical removal of tissue, Good long-term results can be achieved with early treatment, wide excision and subsequent reconstruction of the defect. It should rarely be necessary to excise the ear in its entirety, but total ear reconstruction can still give very good results.